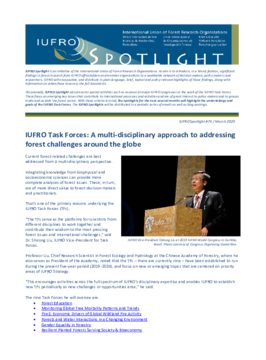 
Current forest-related challenges are best addressed from a multi-disciplinary perspective. That's one of the primary reasons underlying the IUFRO Task Forces (TFs). Integrating knowledge from biophysical and socioeconomic sciences can provide more complete analyses of forest issues. These, in turn, are of more direct value to forest decision makers and practitioners.

"The TFs serve as the platforms for scientists from different disciplines to work together and contribute their wisdom to the most pressing forest issues and international challenges," said Dr. Shirong Liu, IUFRO Vice-President for Task Forces.

The nine Task Forces he will oversee are:

Dr. John Parrotta, IUFRO President and former Vice-President for Task Forces, pointed out "What all recent TFs have had in common is a very high level of activity and productivity, thanks to the excellent leadership of their coordinators (or coordination teams) and the sustained energy that these often very large multi-disciplinary groups seem to generate."