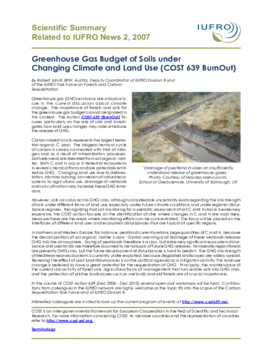 focuses on the greenhouse gas budget of soils under changing climate and land use in Europe as addressed by COST 639 (BurnOut).

The greenhouse gas budget of soils under changing climate and land use is at the centre of COST Action 639 (BurnOut).  The main focus of interest here is on the role of soils and land-use changes in the reduction or increase of GHG emissions.  As both C and N occur in terrestrial ecosystems in several chemical forms and are potentially emitted as GHG, changing land use due to deforestation, biomass burning, conversion of natural ecosystems to agricultural use, drainage of wetlands and soil cultivation, for example, may increase GHG emissions.  But soils can also act as GHG sinks, although considerable uncertainty exists regarding their sink strength.

COST is an inter-governmental framework for European Cooperation in the field of Scientific and Technical Research.  In the course of COST 639 (Dec 2006 - Dec 2010) several open-call workshops will be held.  Contributions from colleagues in the IUFRO network are highly welcome as the topic fits into the scope of the Carbon Sequestration Task Force and of IUFRO Division 8.