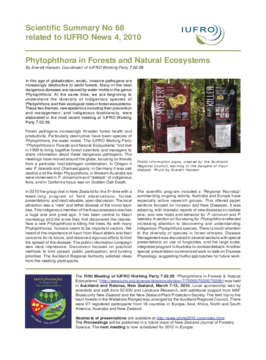 A recent meeting of IUFRO Working Party 7.02.09 in New Zealand focused on the ecological role of Phytophthora in forest ecosystems and discussed new epidemics and indigenous biodiversity.


The Fifth Meeting of IUFRO Working Party 7.02.09 "Phytophthora in Forests & Natural Ecosystems" was held in Auckland and Rotorua, New Zealand, March 7-12, 2010. The local attraction was a "new" and lethal disease of the iconic kauri tree. This indigenous member of the Araucareaceae reaches a huge size and great age. It has been central to Mauri cosmology and life since they first discovered the islands. Now a new Phytophthora is killing the trees.

Phytophthora in Forests and Natural Ecosystems