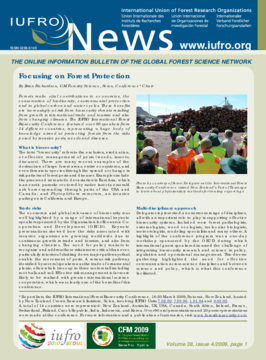 This issue focuses on biosecurity topics and threats from invasive alien plants. It publishes the call for papers for the 2010 IUFRO World Congress, and presents the new IUFRO publication on adaptation to climate change.


IUFRO News issue 4 of 2009 reports from the IUFRO International Forest Biosecurity Conference in New Zealand where biosecurity threats resulting from growth in international trade and tourism and also from changing climates were discussed. It also includes a report from the international conference on Plant Invasion and Forest Ecology in India. Furthermore, the new IUFRO World Series 22 on "Adaptation of Forests and People to Climate Change - A Global Assessment Report" is presented. The report has been prepared by the IUFRO-led CPF-Global Forest Expert Panel on Adaptation of Forests to Climate Change. Finally, a call for papers for the IUFRO World Congress 2010 has now been released.