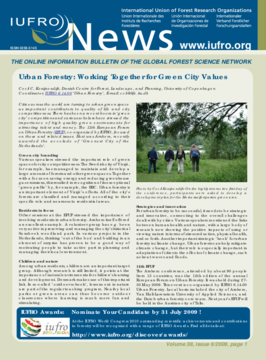 This issue highlights urban forestry and the importance of green spaces in cities and also looks at legal aspects of sustainable forest development particularly in Europe.


IUFRO News issue 6 of 2009 reports from the 12th European Forum on Urban Forestry (EFUF), co-organized by IUFRO in Arnhem, the Netherlands. The importance of green spaces in cities, the involvement of residents and particularly of children in urban forestry planning, and the role of urban forestry in mitigating climate change were discussed. At the 11th International Symposium on "Legal Aspects of European Forest Sustainable Development" held in Zvolen, Slovakia, the focus was on the development of modern forest legislation and implementation of forest policy tools in different countries particularly in the Western Balkan region.