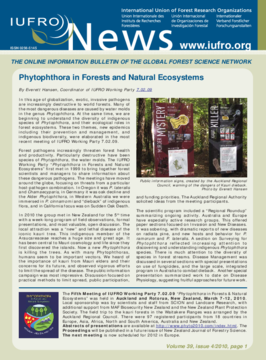 Forest pathogens increasingly threaten forest health and productivity. Particularly destructive have been species of Phytophthora. This issue reports from the 5th IUFRO meeting on Phytophthora.


Read about the findings of the Fifth Meeting of IUFRO Working Party 7.02.09 "Phytophthora in Forests and Natural Ecosystems" held in Auckland and Rotorua, New Zealand, March 7-12, 2010. The two major topics of discussion were new epidemics including their prevention and management, and indigenous biodiversity. A second report comes from the 4th International Casuarina Workshop that took place in Haikou City, Hainan Province, People's Republic of China from 22-25 March 2010. This workshop revealed a substantial change in the way casuarinas are cultivated and utilized. The news issue is rounded off with information on the upcoming IUFRO World Congress and on IUFRO website features and miscellaneous announcements.