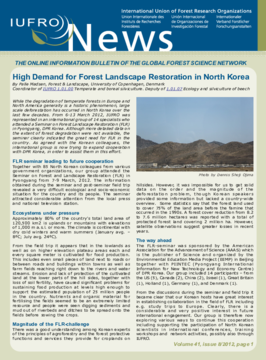 Read reports from meetings on forest landscape restoration, alien invasive species and boreal mixedwoods, and get informed about events such as the 3rd IUFRO Latin American Congress 2013.


IUFRO was represented in an international group of 14 specialists who attended a Seminar on Forest Landscape Restoration (FLR) in Pyongyang, DPR Korea, in March. From the discussions during the seminar and field trip it became clear that the Korean hosts had great interest in establishing collaboration in the field of FLR. Further meeting reports in this issue inform about conferences in boreal mixedwoods in Canada and about alien invasive species. The announcement section includes positions, proceedings, grants etc. In any case, mark your calendars for the 3rd IUFRO Latin American Congress in June 2013 in San José, Costa Rica, and the 24th IUFRO World Congress in October 2014 in Salt Lake City, USA. And take part in shaping IUFRO's future strategy by filling in the IUFRO survey!