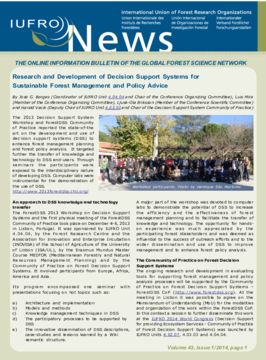 Forest decision support systems, biodiversity and sustainable development in the context of climate change, women in agroforestry and, higher forestry education are among the main topics of this issue.


The first issue of IUFRO News in 2014 reports highlights a series of important IUFRO co-sponsored meetings such as the 2013 Decision Support System Workshop in Lisbon, Portugal, where the state-of-the art on the development and use of decision support systems (DSS) to enhance forest management planning and forest policy analysis was discussed.

The symposium on "Biodiversity and Populations in the Context of Climate Change" held at the University of Antananarivo, Madagascar, aimed to answer questions related to issues on biodiversity valorization for the benefit of the Malagasy people in the context of climate change, based mostly on practical experiences in Madagascar and around the world.

Cross-sectoral Policy Impacts on Forests and Environment, Women in Agroforestry and, the Challenges of Higher Forestry Education are other important topics that are highlighted in this issue. Announcements concerning new publications, open positions, etc. as well as upcoming meetings, especially the 2014 IUFRO World Congress, round off the newsletter.